There is no way to sum up a park like Yellowstone. It would take at least a full season to see the attractions that are official, then there are so many springs and back country tracks to explore, you could make a lifetime out of exploring the area. As a tourist though, we stuck to what we could get to quickly, missing many things we hoped to see but still being left breathless by what we did.

The first thing that left us breathless though was the inability to get a campsite. When we got there on Thursday, the ENTIRE park was full… as were the private campgrounds outside the park. Part of this is because Yellowstone is a must-see for tourists around the world, and part of it is because COVID-19 has turned loose tens-of-thousands of people, working remote and unwilling to fly. This makes the great American road trip much more exciting than getting stuck in a 14-day quarantine after landing in a foreign country.

Yellowstone also sits right above the Grand Tetons, a wonderful park in its own right. I would love to spend more time exploring that area, but with Yellowstone on the bucket list, we were on a mission. And after spending a night in a dispersed campsite 45-miles south of Yellowstone, we braved the traffic to re-enter the park and hunt for a campsite.

We finally settled on site A63 in the Lewis Lake Campground. While it was shady and packed with other sites on three sides, we set up camp and spent some time on the dock admiring Lewis Lake itself. It’s vast compared to what the map makes it look like: the trees on the opposite shore look like a Rob Ross painting, especially during sunset.

With plenty of daylight left we set out to explore the park’s amenities first, heading to Grant Village for fuel, supplies, and post cards. I also managed to indulge my favorite tourist activity, making a pressed penny. It’s usually 50 cents plus a penny, but Yellowstone asks for a dollar. Oh well; a pressed penny is the perfect souvenir for a motorcyclist who is concerned about space and weight.

Next up was checking Old Faithful off the list. This turned out to be way bigger than expected. The sheer volume of geysers around it meant you needed a full day to see it all. We hiked up to the lookout point to catch Old Faithful erupting, then got to work hiking the many boardwalks and trails. Kate eventually got hungry and a bit worn out, but not before seeing most of the sights, several bison graving within about 25-feet of us, then back to the bike for a snack lunch.

There are A LOT of geysers around Yellowstone.

We tried to look inside the Lodge (it’s a wonder in its own right) but it was closed for the season. Drat. The gift shop had some cheap (for a gift shop) shirts so I got myself a long sleeve to help fend off the cold nights.

Back at camp we enjoyed one of Kate’s great creations over a campfire, made mulled wine out of a cheap bottle of red we picked up, then settled in for the night. Kate’s air mattress went flat overnight so she woke well before me. We did the morning routine and went back out to explore more of the park.

This time we turned east at West Thumb, admiring Yellowstone Lake as we went to Lake Village and checked out the Fishing Bridge. From there we went north and hiked around the Mud Volcano area, then turned west toward Norris. We saw the Artist Paintpots, Gibbon Falls, then worked our way back to camp on the south end of the park.

We couldn’t find any reservable sites to the north, so we decided to trek out of the park the next day. On the way we stopped at the Grand Prismatic Spring, Fountain Paintpots, and took a few more minutes at Gibbon Falls.

The run from Norris to Mammoth Hot Springs was stunning. Alternating between wide open meadows to forested hills, it then became a canyon pass. South of Mammoth Hot Springs was the Terraces, which was probably my number one “must see” for the park. We drove the one-way road around the Upper Terraces and stopped for lunch by one of the quiet springs. 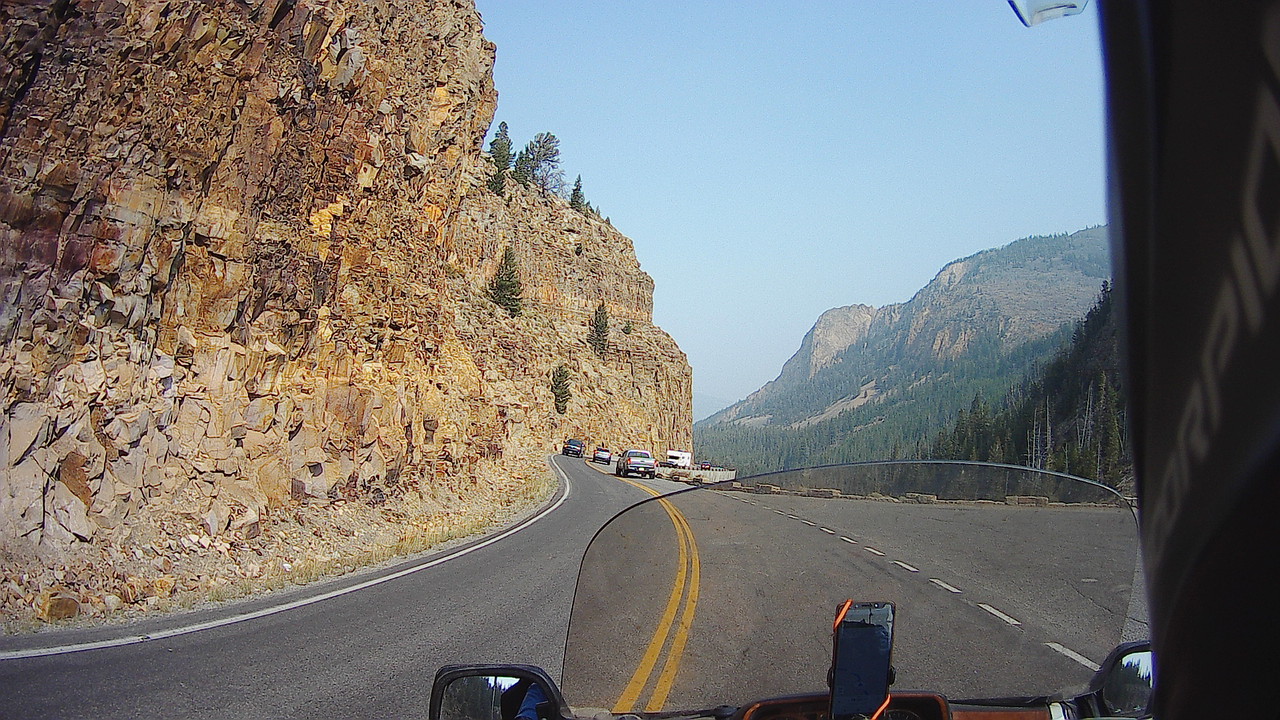 The entire area was breath-taking, and Kate found a quiet spot to spread some of her sister Natalie’s ashes. Flowing through the spring and back into the earth, then riding forth again in the pools of orange, green, red, and blue. It was solemn but very touching.

The Lower Terraces turned out to be  a let down for me. Most of them had dried up years ago, leaving wonderful shapes but no color other than the grey-white of the desolate earth. From photos the place used to have dozens of pools, each one a different temperature, therefore becoming home to a different color of algae, making for a kaleidoscope of colors that even man-made fountains simply can’t mimic.

There were a few pools on the far end so we hiked up the steep boardwalks to get a glimpse, then returned to the bike to fuel up and resupply in Mammoth Hot Springs. This area is home to the park headquarters and features many old buildings that serve as barracks, along with the original chapel, a large post office, and more. We caught two rangers folding the flag at the end of the day, saw some elk munching on the landscaped lawns, then went out the north entrance to the town of Gardiner.

This old cowboy town was a lawless shanty in the 1800’s but now exists to serve tourists coming and going from the park. Elk walked right down the streets in search of the lawns and landscapes of homes. There were several outfitters, shops, and a laundry advertising, “drop your pants here, self-serve.”

Being ahead of our budget it was time to splurge, so we went to the Iron Horse Saloon and dropped about $70 on elk burgers and grilled salmon, plus drinks. It was fantastic but it also represented about 3-days of meals made on the camp stove. Right next to the place was an original 1800’s jail from the town’s days as a wild west mining camp.

It sat on the cliff edge and would have had a wonderful view for an unruly drunk to wake up to, were it not that there were no windows on that side of the building. From outside, the jail was tiny, with an even smaller cage inside split into three cells, all in the shadow of the steel girder bridge that crossed the Yellowstone River.

Up in the hills north of Gardiner we found a campsite on the roadside with a fantastic view, though it was partially obscured by wildfire smoke. Some people camping in an RV came along and built a fire to do some camp cooking. We chatted with them a bit and kept their fire going for awhile to enjoy the warmth before dousing it and heading to bed.

As dawn broke it was time to fight morning traffic back into Yellowstone’s Northwest Entrance so we could hit the Beartooth Highway. Finally we got to see some real wildlife, including hundreds of bison, many elk, and a few pronghorn for good measure.

Beartooth highway took awhile to get through because of it’s twists and turns, and a 20-min delay due to road construction. When we reached Red Lodge, MT on the other side we stopped for gas and continued on to Park, City, MT, where we stayed at the Story House.

It was originally laid down in 1917 and stayed in the family until the current owner got hold of it, converting it into an AirBnB that felt like an early 1900’s tenement or boarding house. I got to see the original coal-fired furnace in the basement and the massive coal room, climb the original wooden stairs, and listen to trains blare their horns, punctuating an otherwise dead-quiet town.

Montana will give way now to  South Dakota, then the real “plains crossing” will begin, with arrow-straight roads and a big increase in cultivated lands. Stay tuned for more and be sure to follow our Instagram page for picture updates as well.