The interesting thing about Texas isn’t just how big it is, but how its vast history and geography mix to swallow a traveler. There’s so much to see and so much space to cover that I’ve found myself tracking some sort of beeline from south to central, west to north, and now I’m aiming back to the center.

So much of the state is fairly plain Jane country: rolling hills and cleared fields, dotted with small towns, ranches, and the occasional river. I’m looking forward to moving west and getting back into the desert, but I also know that, once there, it will be the view-of-the-day until I get near the California coast. Being an avid traveler and having lived in California most of my life, I’ve seen quite a bit of desert.

The exotic vibe people feel for the American Southwest doesn’t resonate with me as much. Wind-blown border towns, derelict gas stations, people trying to sell you meth, and state police hiding in the shade of an underpass are what I think of. On the plus side, the desert is varied, and I’ve got some geological treasure to look forward to, along with a route that will take me away from the towns I usually see when trekking the southwest. But let’s catch up instead of look ahead.

After retracing my steps from Big Bend to Del Rio, I picked a different campground which was dispersed and therefore only $3.00. I spent Thanksgiving outside of San Antonio again, staying with my friend Tony, another veteran of the VCR (Veterans Charity Ride). I got some writing work done and did a bit of planning, trying to figure out what I wanted to see in Texas and where I wanted to enter New Mexico.

Tony and I took a ride to Luckenbach, Texas, which is so far my favorite post office visit, and probably my favorite tourist trap of the trip. The backroads were a bit beat up but also had good riverside views, interrupted by quaint old towns that were once important watering spots for trail-riding wagons and cattle drives. Now, they either exist as clusters of empty buildings or as revived dance halls and general stores, with as many historical markers as they have residents. 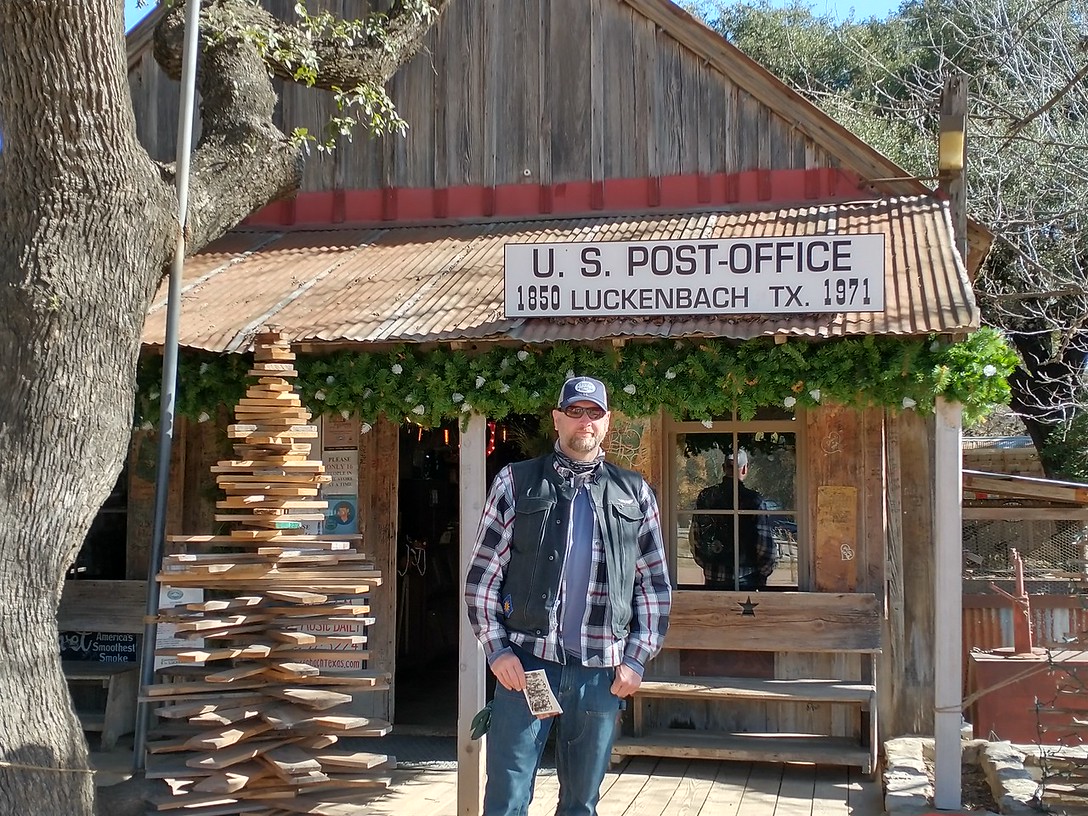 I spent time back at my friend Neil’s place on Thanksgiving day, which gave me a chance to meet his kids and reunite with my friend Josh, also a VCR alumni. We shot the breeze, air fried a turkey, and drank beer; good ‘ol Thanksgiving staples. I had dinner at Tony’s though and entered a multi-day food coma before finding a campground in Waco, Texas. Rain and freezing temps pushed me back a day but I made it to the campground with no problems.

It was right on Waco Lake, and I watched planes coming in low to land at the regional airport, caught the sunset, made tacos, and watched the moon rise. The next day I explored Waco itself. My search for pressed pennies sent me to a national park where several mammoths were being exhumed and studied in place. The park was small but I hiked the mile of trails, enjoyed the climate-controlled building that was built about the dig site, and went in search of more modern history.

Waco is unfortunately famous for government overreach, with the 1993 siege of the Branch Davidian compound and the 2015 police shootout at a biker gathering being the biggest news to come from that city in the last hundred years or so. Named the Mt. Carmel compound, it had been around since the 1950’s, but burned to the ground April 19, 1993 after the ATF sent some grenades in through the wrong window. 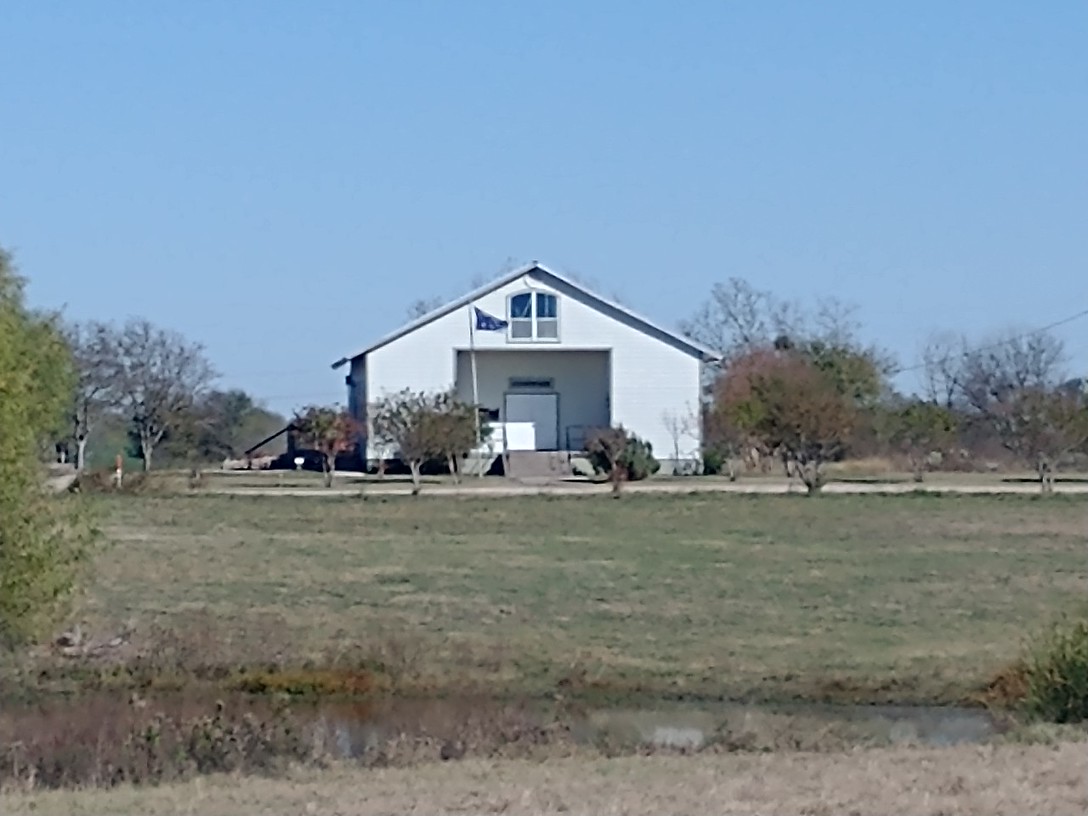 The New Mt. Carmel Compound is far more modest, being littler more than a church building, several plaques, a few mobile homes and small structures, and a gate, which was unfortunately closed. It’s private property and they do allow people in to visit their center when the gate is open, but I had to satisfy myself with a few pictures from the road.

Back in town I went over to the former site of Twin Peaks, a restaurant that hosted meetings for the Confederation of Clubs (COC), a fairly common group in each state that tries to organize the many motorcycle clubs in the area, whether they be 1% clubs or more mainstream riding clubs. On May 17, 2015, someone stepped on the wrong person’s toes and a fight broke out in the parking lot outside. Someone thought it was a good idea to start shooting, and the police– watching from a distance– decided it was a good idea to join in.

Quiet now, this was the scene of much of the shooting in Waco back in 2015.

Nine people died, they decided to arrest and charge the entire group (nearly 200 people, some of whom rode in after the shooting), and then the DA’s office doubled-down by trying to set bail as high as possible. It’s actually still playing out, with the DA losing reelection, allegations of abuse of power flying around, and no one yet convicted. Last I checked only one person actually made it to trial, and there was a mistrial. Over 130 civil right lawsuits are still flying around the area.

Regardless of the circumstances, seeing people shot in the street isn’t good for wider society, let alone the people directly involved. I used the empty parking lot (now a Louisiana seafood restaurant because Twin Peaks pulled their franchise  almost immediately following the shooting) as a place to reflect on the uselessness of violence, along with how violence can seem like such a quick fix to complex situations, invariably turning out to be just the opposite. 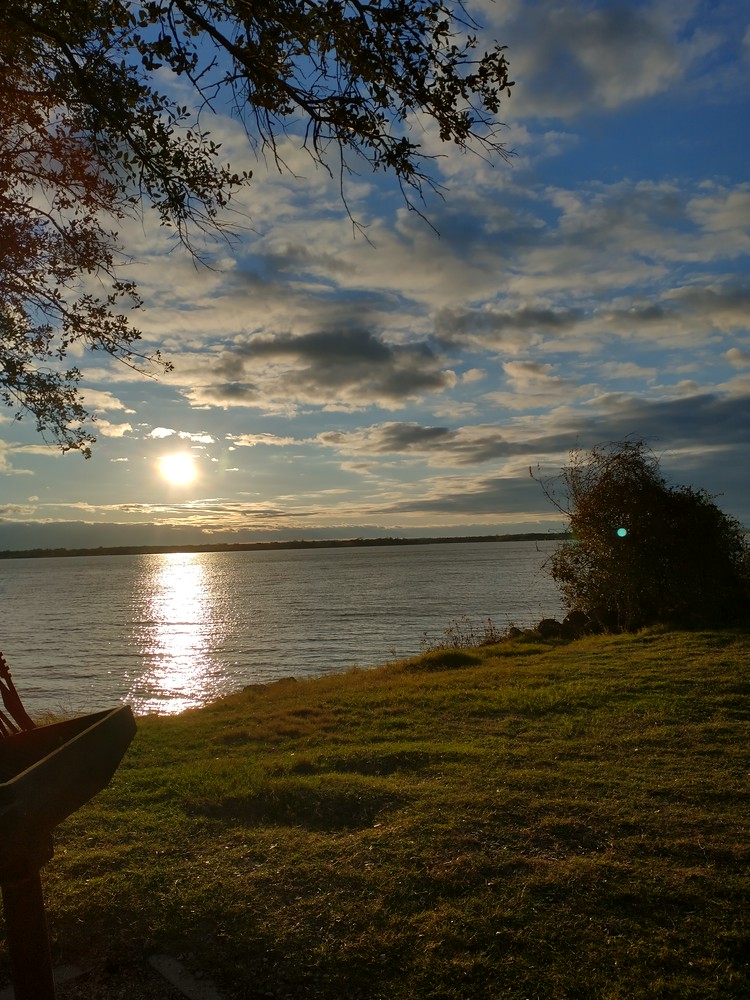 After another night of taco making and cold bitter wind at the campground, I made my way up to Gainsville, TX. The town is quite close to Oklahoma, north of Dallas on I-35. Other than several really nice veterans memorials and a cool old train station and courthouse, there isn’t much reason I’d come here except to visit friends.

My friends John and Chris, aka the Crash’s, first intersected my timeline in 2001. Back then people still used Yahoo! Groups to form social clubs, and CRASH!club was born from that. The lose association of about 300 people online and 30-50 actual people who showed up to group events became my main social circle all the way up to my deployment to Iraq. After Iraq I actually settled into the Crash’s spare bedroom before eventually buying a house out in the Mojave desert.

It’s been great catching up since John and Chris are low-key people. I’ve hid out in their upstairs room and hammered out a lot of writing, including this piece, but come the morning I’ll be moving again. To put some sense to my trip I’m using a somewhat odd route. I’ll be combining the route of a fictional book series I read as a tweenager with a real and very historic route. 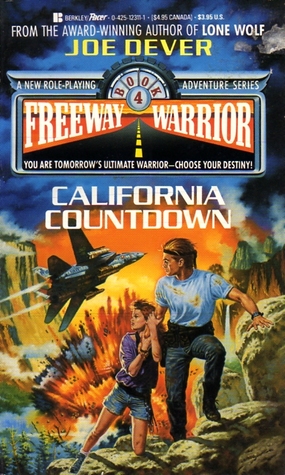 The books series is by Joe Dever, who wrote a wildly popular book series for kids an young adults called Lone Wolf. He did a less-known series called Freeway Warrior in 1988-89 also, using imagery from Mad Max and the backdrop of the American Southwest to make his own story. You play the book as Cal Phoenix, a Californian who was in a mine out in Texas when the nuclear apocalypse happens, sparing you the nuclear winter and radiation.

The story has you trying to get a group of colonists to California, where society is rebuilding. By re-reading the series I was able to piece together the route from the book, since Dever used real locations, highways, and terrain for the most part. It’s a flimsy premise to travel home on, but the route happens to cross many of the areas I wanted to visit, allowing me to follow the book’s route and take detours. How else can you make it interesting to travel from one podunk town to the next? Seriously, how?

The other route is the Butterland Overfield trail. This route was created to get mail to San Francisco without going through the mountains. It starts in Kansas City and has a terminus in San Diego, Los Angeles, and San Francisco. It was doomed with the outbreak of the Civil War, as the Confederacy confiscated the wagons and many of the animals used to draw them.

The route was restarted and expanded, and was even consolidated to include the famous Pony Express which ran along what is now I-80 and Highway 50. Eventually it was rolled into Wells Fargo and American Express as well. There are many markers in towns that were stops for the stage line, several buildings and forts that were built along the line, museums dedicated to the line, and even a few hiking trails built on the original route. 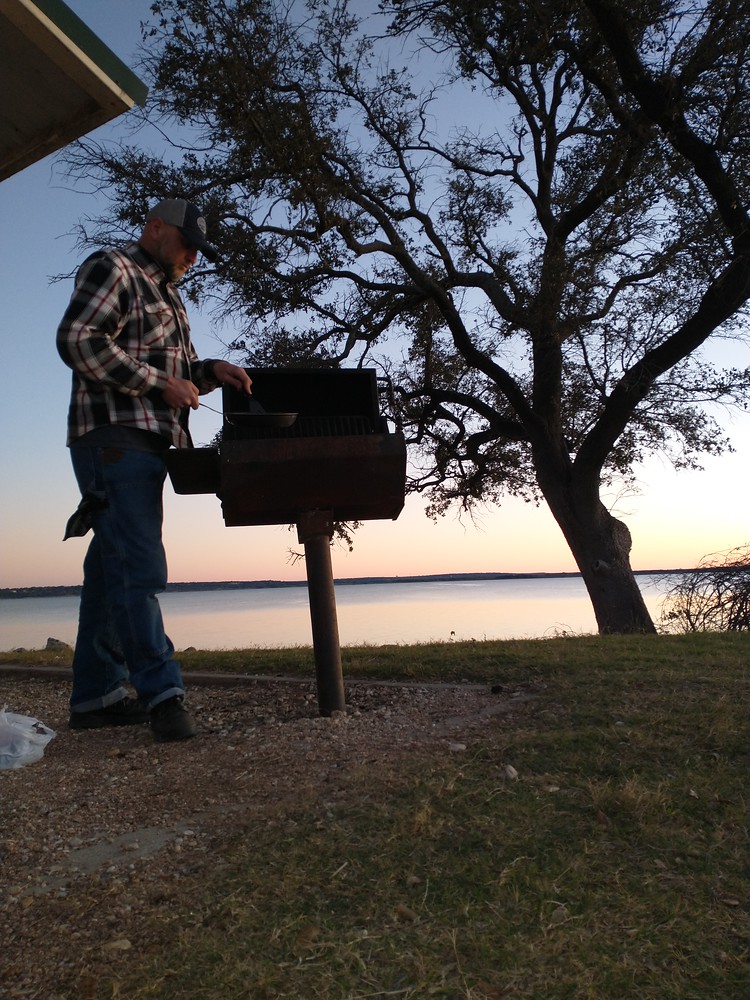 In 2009 funding was set aside to explore the possibility of creating an official historical route, but as of yet no such route exists. That gives it a bit of a Wild West vibe for me too, since I’ll need to do my sleuth work to hunt down individual markers. I’m looking forward to having more of a cause for my travels and less of this aimless rambling feeling, so stay tuned for more updates as I work my way home to California. I’m 170 years late for the Gold Rush, but my family and friends, and the woman I love more than anything, are all back there, so it’s a trip worth taking.