Well, it’s been weeks since Kate and I separated our journey’s in New Orleans, but in that time she’s begun her own trip, I’ve continued mine, and our paths crossed again here in Texas. It was great to spend a few days together exploring Big Bend National Park and Terlingua, but Kate is already into Arizona now while I continue to wander Texas with ‘Ol Dusty.

For me, the scenery changed immediately when I crossed the bridge into Texas. The devastation of hurricane Zeta was everywhere, then suddenly vanished. In Louisiana it looked similar to a war zone, with cars laying upside-down in ditches, buildings shredded or completely missing from their foundations, and most of the shops being abandoned. Upon crossing into Texas on Hwy 82 things began to look like you’d expect from beachfront communities.

Storm damage from the hurricanes showed no mercy, anywhere.

There were piles of debris stacked on the roadside awaiting pick up, but the houses were either having repairs done or were already in pristine condition, and very few felled trees were still in place; most were cut into neat stacks awaiting pick up.

The roads were also mostly clear of construction, with the seawall along Galveston Island being the only time I actually had to stop and wait for two-way traffic to use a single lane. I also got to do my first real night of beach camping, staying on Bolivar Beach, sleeping without a tent but not being mauled by mosquitoes.

In the morning, however, I was awakened by a flock of birds trying to climb over me to get at my half-eaten bag of Chili Cheese Frito’s, so nature still found a way to remind me I was part of the show and not just observing it. Getting back onto the mainland I spent a few days with my old friends Jim and Christy, whom I haven’t seen since 2004.

They were part of a motorcycle riding club I was in way-back-when, and Jim had spent years bouncing around the country as an active duty member of the Coast Guard. It was great to see him after all these years, managing a career change and a family and a home. Back in the day Jim and I were the two most likely people to blow something up with fireworks or crash into a ditch trying to do something stupid. My how times have changed.

From there I ran up and spent a few days with another friend, Neil, who I know from the Veteran’s Charity Ride. He was on the ride in 2017, my first year working with the organization. He is a fellow Marine veteran and I really hit it off with him since he is a straight-shooter who talks plainly and doesn’t harbor much in the way of prejudgements about the world.

We got to enjoy some breakfast tacos (how glorious it is to be back in the land of abundant taqueria’s) and each other’s company, and he took me to the town of Greune (pronounced “green”) where I added to my smashed penny collection and got some postcards.

Kate was actually staying less than an hour away with friends of her own, but we chose to meet up in Del Rio, right near the Mexican border. We found an awesome campsite on the river, though I spent most of the night chasing off the most determined and least stealthy racoon I’ve ever met. If he wasn’t messing with my sleep I would have loved the interaction, since he had the tenacity to climb INTO the sidecar looking for food scraps, the cheeky little Trash Panda. 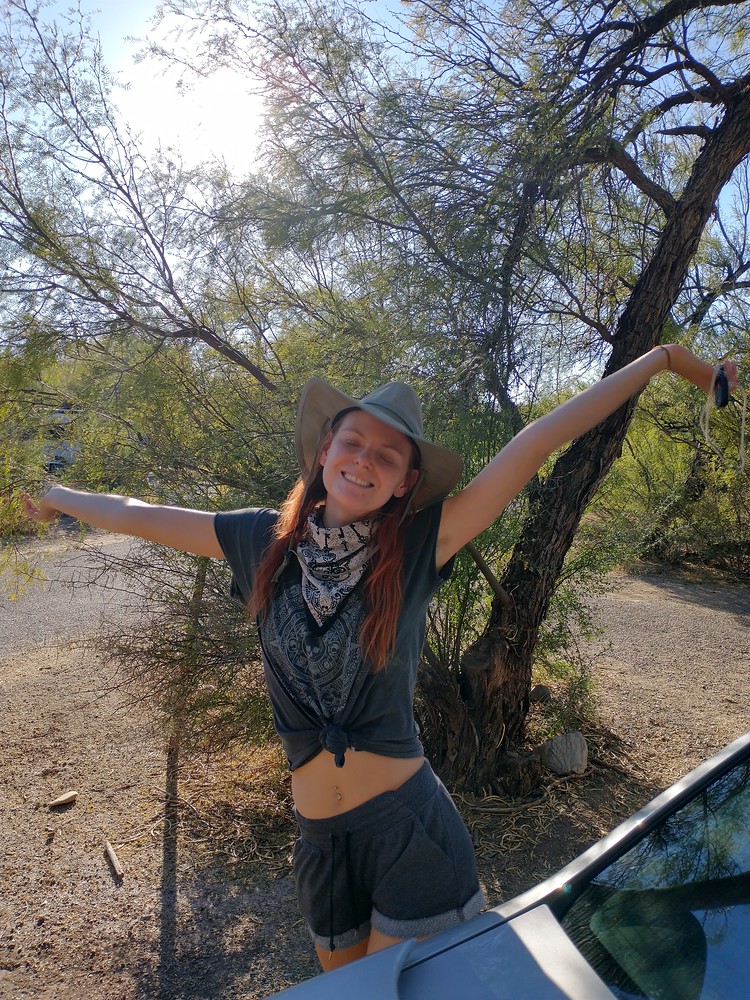 Kate and I took our own time getting to Big Bend but kept stopping at the same places by random chance. The tiny towns along Hwy 90 are a mix of old-time, old-west feel and almost post-apocalyptic decay, depending on how the towns have fared economically over the decades.

Big Bend is a must-see park if you like desert views. I’ve traveled the deserts of California, Arizona, Utah, Nevada, and even Oregon extensively: I even lived in the Mojave desert for nearly a decade. Having seen that much desert landscape I was still taken aback by the views in Big Bend. It has a lot of geology because of old volcanic activity and the way the Rio Grande has cut its way through the valleys and mountains.

Being an international border the Rio Grande is also home to a lot of culture, with early settlers caring more about survival and trade than what side of the border you lived. There were plenty of old ruins and trails to mix with the visitor centers, purpose made hiking trails, and natural features.

We were only able to secure one night of camping in the park, so we used that as a jump-off point to explore the rest of the park (what can be accessed by road at least) before exiting the west side. We got in a hike, drove through the Chisos Mountains, saw watersheds, mountain passes, and verdant river valleys, and stopped at the old visitor center in Castolon, which was originally a general store and unofficial bank before the area became a park.

After catching the sunset at the Santa Elena Overlook, we rattled our way up Maverick road, which is unpaved but heavily trafficked, meaning a LOT of washboard and ruts and dust. We stayed well outside the park at a campground called Biker’s Haven, which was basically some lean-to’s and picnic tables in a clear patch of desert.

In the morning we explored Terlingua which– even though it has a ghost town– is still active. Abandoned buildings from 1900 sat in a cluster, their ruined wooden roofs calling back to an older time. Right next to them would be mud-brick buildings of the same design, their corrugated steel roofs sporting satellite dishes but looking nearly the same.

The gift shop we found was an old train depot and was among the coolest I’ve been to on this trip. We spent over an hour looking at things, like a wall dedicated to the former mayor of Terlingua, a beer-drikning goat. We looked at some abandoned mineshafts and went to the cemetery, which was founded in 1901. 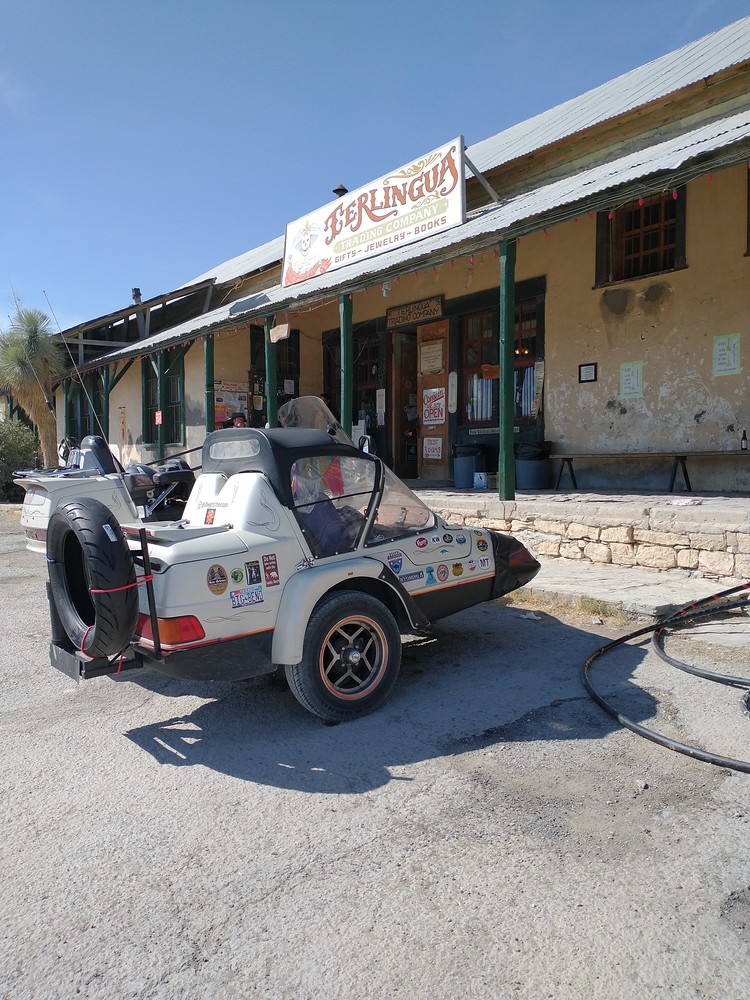 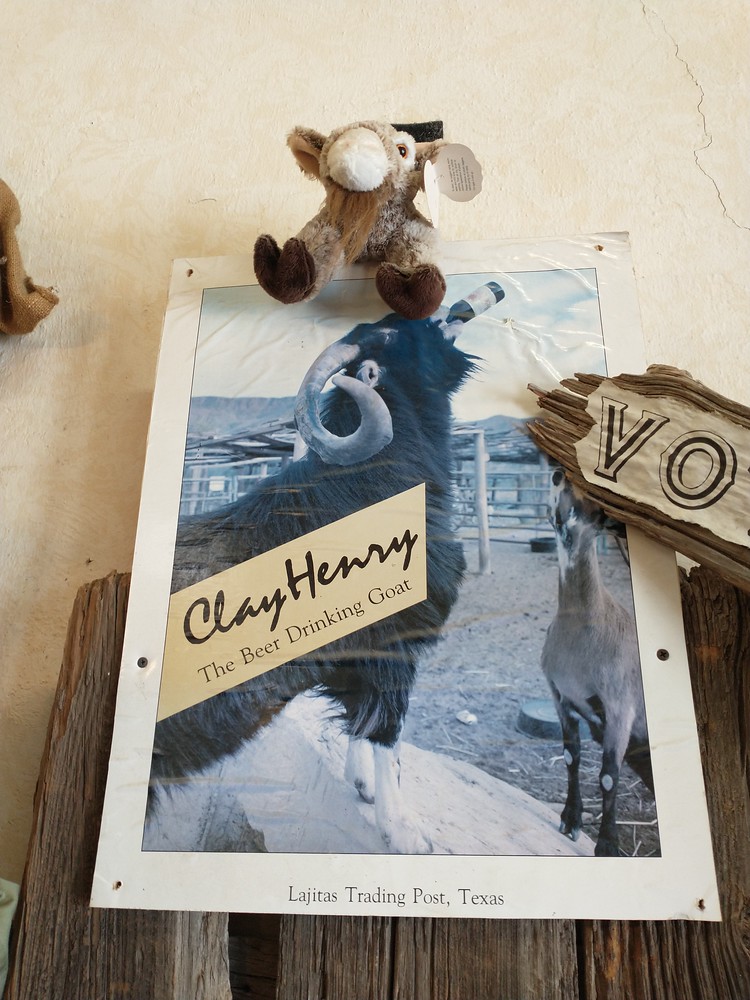 Despite it’s age and the many hand-laid wooden crosses and hand-carved stones, there were graves placed there from 1901 to 2017. There were many children and teenagers, taken too young, both 100 years ago and within the last few years. The place was sombre despite attracting a lot of tourists, and I especially loved the cross-cultural feel with the many Dia de los Muertos images mixed in with old-time cowboys. 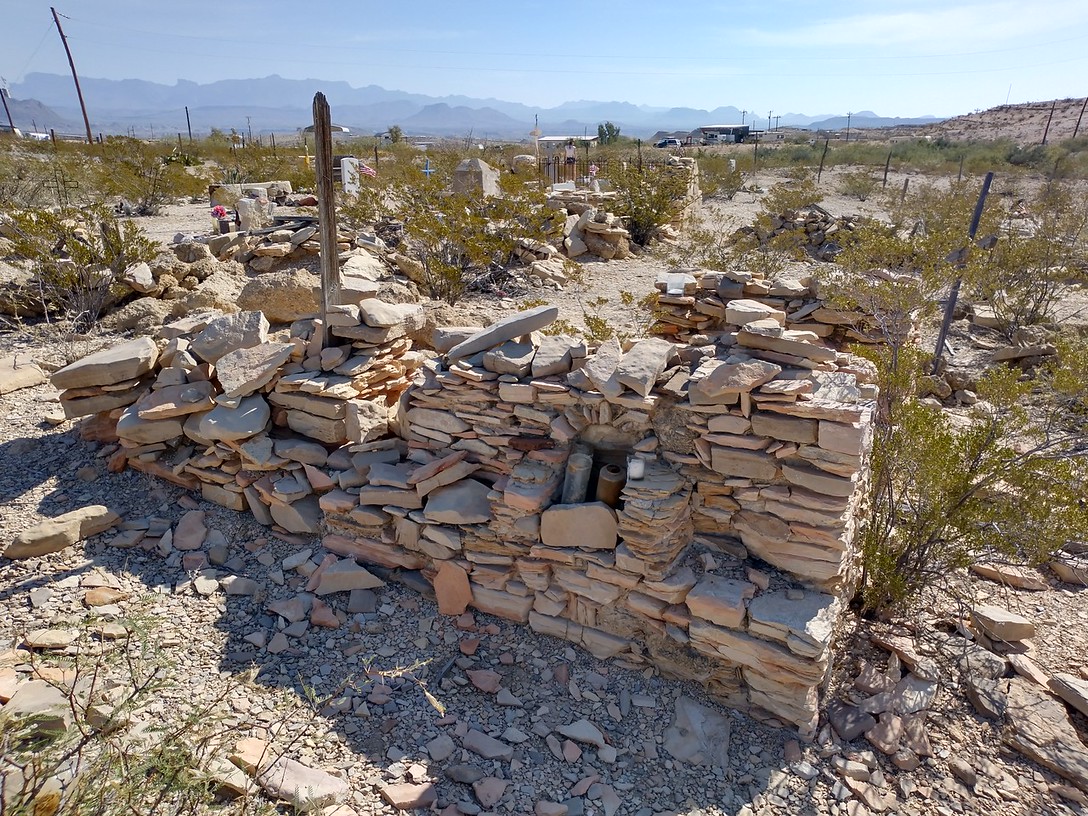 We stayed in a campground for one last time together, with high winds making sleep difficult. We arose early and Kate made her way west while I turned back east to visit more friends in San Antonio. The last few days have given me time to see the Alamo, San Antonio’s Riverwalk (which I had been to once, right before deploying to Iraq in 2004), and visit some more small cow towns in the Texas hill country.

I have a lot more of Texas to see, and several friends to visit, but I’ll leave that for another installment. Until next time, enjoy the ride: wherever it takes you.