Here we are in Louisiana, the Big Easy, though things are anything but. We’ve been rained on, bug bitten, and otherwise assaulted by Gulf Coast weather, though we are at least ending things on a good note. Or really, things aren’t ending so much as they are changing.

We had a vague plan for Kate and I to separate in Texas somewhere, so she could fly to Kansas City and pick up a car, then road trip it home while I plodded west on ‘Ol Dusty. But with Dusty really showing the miles of this trip, we’ve decided to stop here in Louisiana. But let’s get to that in due time, and pick up where we last left off, in Orlando, FL.

Florida isn’t much for motorcycling if I’m to be honest, mainly due to very straight and flat roads, combined with sticky southern weather and unpredictable rains. We made due by visiting friends and checking out some of Orlando. The city has some history, but being in search of off-beat sights, Kate and I were most impressed with the fantastic wall mural of Mr. Rogers.

We also stopped by the Ace Cafe. Originally a truck stop in north London, the place was a stop for cafe racers and other malcontents. In the 1950’s and 1960’s, young men could commit the sins of wearing leather, having greasy hair, and riding motorcycles too fast. 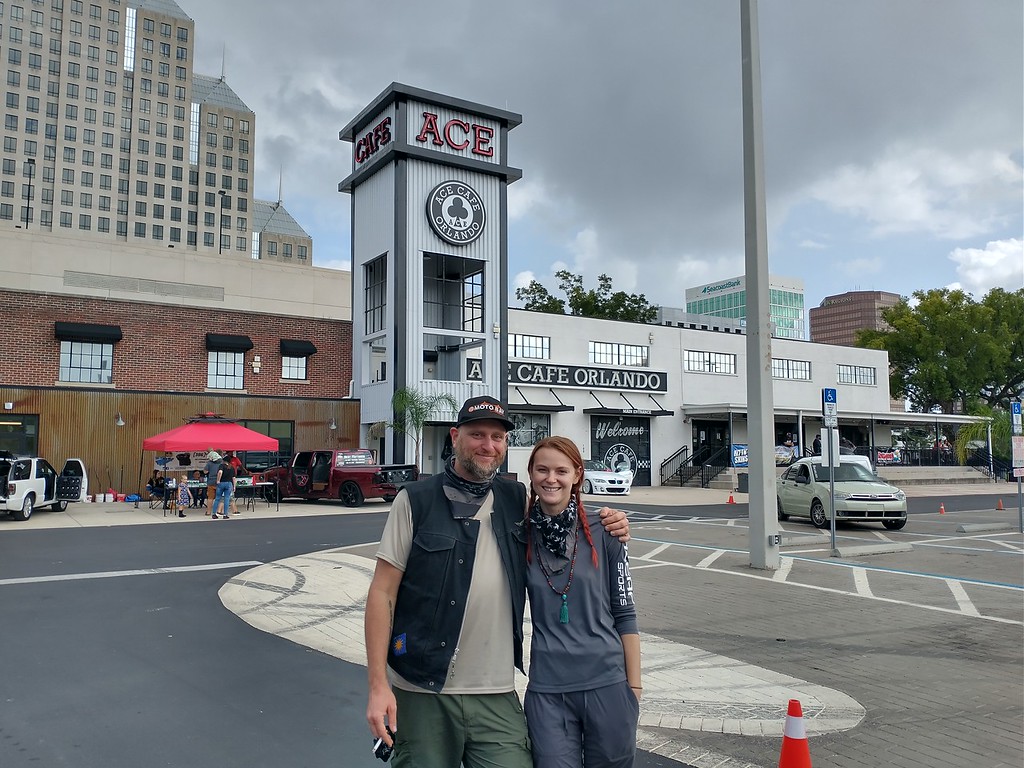 In the rebirth of everything retro, the cafe not only reopened at its original location, but has an Orlando branch as well, with a decidedly American feel. The menu was burgers and beer, and we where there on obnoxious-car-stereo day, with the parking lot full of cars painted like easter eggs, bumping obnoxious dance music and latin hip-hop.

But hey, the food was good and we were ready head south to see the Florida Keys. We stayed the night in Homestead before riding down the Keys and halfway back up. Honestly, most of the Keys were a let down, with the real views being tourist trap destinations. Key West is definitely built as a destination, and we checked the box of hitting the southern-most tip of the continental United States.

We stopped in at Ernest Hemingway’s house and pet the six-toed cats there. Since we visited his grave in Idaho, it seemed appropriate to stop in and get a pressed penny (except the pressed penny machine was broken). We decided against getting some Key Lime pie. When you go to a place that’s famous for something, every place has to sell it. That means you’re more likely to find imposters than if you got it in the outlying areas.

Hoping for a respite from the oppressive heat we caught a brilliant sunset at our campground at Curry Hammock. Being Florida though, being on the beach did nothing to cool things off and the stickiness persisted… along with sand fleas. Keeping the rain fly off the tent was also a poor choice, with a 1am rainstorm sending us scrambling. Actually, Kate was scrambling: I just used my sleeping bag as a shield and tried to pretend it wasn’t happening.

Back on the mainland we did a repeat by hitting up a Jamaican restaurant in Homestead called Yardi Spice. Their Johnny Cakes are fantastic by the way, but you can’t go wrong with anything from what we tried. We also went through the Everglades, which is the only time I’ve gone through a pass with an elevation of 3ft… only in Florida.

We also were mauled by the most aggressive mosquitoes I’ve ever encountered in my life… and I’ve been to Minnesota. But to keep things on a positive note, we took advantage of the ridiculously straight roads of Florida.

Kate took the controls of ‘Ol Dusty for a few miles and managed not to chuck us into a bayou. She actually did just fine, with her upshifts through the gears being spot-on, though a little rough on the shifting down through the gears. Considering she hadn’t been out of first gear before, or on a motorcycle with more than 100cc’s, she did great with Dusty’s 1400lbs weight and 100 horsepower.

The Gulf-side of Florida got a bit better, with (slightly) lower temperatures and a bit of variety in the views. We stopped off at the smallest post office in the country to send off postcards, then made our way to the city of St. Petersburg. We went straight for the Dali, a museum with the largest collection of Salvador Dali’s work in the world.

The place was stunning, as was his work of course, but there was also a wonderful garden and cafe, along with a seriously large gift shop. We kept to the usual postcard & sticker routine, then spent a few days with my friend Kylo and his wife Vilma. That was a surprising treat.

Kylo and I served in the Marines together and hadn’t seen each other since 2000, so it was going to be a great reunion for me, but Kylo and Vilma were so welcoming Kate didn’t get left out of the mix at all. Vilma is from Brazil originally, and we got treated to dinners and breakfasts you couldn’t find anywhere else, and in between Kate and I got a good sense of St. Pete’s heartbeat.

It was a welcoming city and our stay happened to coincide with the Florida winter: all two days  of it. It was a welcome break from the sweltering heat, but it also meant the daily rainstorms were genuinely cold. Digging out our jackets took awhile, since it looks like a bomb went off inside the sidecar (too many days on the road without a proper cleaning), but we caught a night in someone’s backyard under the carport as we worked our way through the Florida panhandle.

Dance of the Manatee

But let’s backtrack to Crystal River, which was likely the crown jewel of our Florida excursion. Kate has always had a thing for manatees, and as you might imagine, the Florida Manatee is a species found in Florida (funny, that). On top of that, manatees come inland during the winter to find warmer waters.

Since Florida just had its two-day winter, we were likely to find some early arrivals in a place aptly called Manatee Springs. We first swung into the Ellie Schiller Homosassa Springs Animal Sanctuary. This way we were guaranteed to see some manatees right out the gate, since there are three resident sea cows, which we caught during feeding time. Man, those things are huge.

We spent the night in Floral City with some Bunk-a-Bikers. Their home was right on the river and they treated us to a sunset cruise on their pontoon boat. We got to see a tree in the middle of the water, covered in bras, the old Ferris farmhouse, and a zebra… an actual zebra. At first I thought it was a donkey someone spray painted, like the ones I’ve seen in Tijuana, but not only was it real, but its name was Theodore Roosevelt.

The next day was the big money though. We got to head out into Manatee Springs and swim amongst the floaty potatoes. I’d like Kate to write about the experience in her own words, but I can say they are seriously big, seriously gentle, and they have really cool faces. We got to swim in a cove with multiple tour guides who had their day off and were swimming with them for fun, and even they were amazed.

I got to swim with a calf that was as interested in us as we were with them, and I gave him some belly rubs. We watched them feed on grass, swim around lazily, or just sit on the bottom doing nothing (it’s their vacation time, too). Kate even got a nose boop from a huge male, their official form of greeting.

We loaded up on postcards and stickers, and made sure to get a pressed penny of a manatee, then spent one more night in luxury on the riverside, soaking up sunsets and hot tub soaks.  It was kinda hard to leave a spot this plush, but the road called.

There is a whole chapter between here and our current spot in Louisiana, but this post is running way too long. So let’s get to the meat and potatoes. The transmission on ‘Ol Dusty has been showing signs of wear since about Virginia. Nothing too bad, but the bike has 105,000 miles on it. It’s been pulling a sidecar since about 35,000 miles, which it was never designed to do.

Well in Florida the clunky shift into 4th gear became a grinding mess. Fine then, just don’t use 4th gear. Except motorcycle transmissions don’t work like that. The parts all work together, so it’s a death rattle now in every gear. The details are unimportant. The end result is Dusty has terminal damage, deep inside the bowels of his engine.

Removing several hundred pounds of passenger and her traveling gear will help ease Dusty’s burden, and quite honestly the fun is over for me as the pilot. It takes too much effort to not smash spinny metal bits together now, and driving it on the interstate to avoid shifting gears defeats the purpose.

So Kate will be flying to Kansas City to pick up a mighty Toyota Corolla… the best RV ever made. She’ll be road-trippin’ it home in her own adventure, and hopefully our paths will cross again before we got home. Make sure you harass her to write her own blog posts for that: she’s a great story-teller and a better photographer than I am.

I will continue on with Dusty, trying my luck through Texas and then debating about trying for California or turning for Utah, where Dusty has a spare engine/transmission waiting for him. We’ve managed 10,500 miles in 86 days, and the ride continues on in a new form.

On the plus side, I think we’ll both be home for the holidays, in some form or another. We’ll keep the feed alive on Instagram, and I’ll harass Kate to add her own story to our journal here. We never had an official end-date or finish line to cross, but it’s hard not to feel the shift from “on the road” to “heading home.” Let’s see what the next days bring as the adventure unfolds.

2 thoughts on “The Final Miles?”