I didn’t get this finished in time to make it into our weekly email, but here is is just the same. We’re in Coos Bay, Oregon at the moment, about to run up the coast, across to Eugene, then to the Bend, OR area for a few days of exploring.

Klamath Falls certainly checked off the boxes, with a historic downtown, plenty of outlying communities, and a lot of nature. Coos Bay has much of the same, but being on the coast it has a slower vibe. Hwy 101 goes right through, but it’s a 20mph jaunt along a marina full of tugboats and a few sailboats.

The coastal weather is also much different than Klamath Falls, with a persistent wind and cool air, though it isn’t as foggy as Eureka, CA. I’m not sure Kate would gel with the winters, but August means warm sun despite cool air.

We walked downtown, borrowed a friends’ motorcycle to head around the bay, and grabbed some extremely fresh fish right next to the docks. The town has such a quiet atmosphere, partly due to COVID-19 tanking tourism and partly due to logging being curtailed because of Spotted Owl habitats. The town isn’t a ghost town of boarded up shops though, just quiet and with a noticeable amount of commercial real estate on the market.

Between Klamath Falls and Coos Bay though, we got to see Crater Lake and the Umpqua National Forest. That spot ended up living up to the all the landscape photographers that have shown it to the world. The views are stunning and the South Rim visitor’s center is a great spot to check out also.

We decided to take the long way round, following the east rim, seeing Ghost Ship Rock, several waterfalls, and stopping at every turn out we could. Away from the lake there were gorgeous vistas of forest to gawk at, and steep hills gave us the time to look since ol’ Dusty doesn’t do so well climbing hills.

We spent two nights camping near Thielsen Creek, a few miles from Diamond Lake. The resort near the lake gave us a spot to resupply and grab coffee and hot water for tea in the mornings, but the forest camping was free. We also got to hang out with our neighbors-for-a-night, Josh and Nelly, plus their dog Luna.

They were hiking Mt. Thielsen in the morning and would be gone before day break. We traded stories and experiences while I drank their beer. In the morning, Kate and I picked up our interrupted game of chess, and she finally beat me. I’ll blame it on forgetting my strategy from the night before, but she beat me fair and square. Now the gloves are off… rematch time.

Our second day there we explored Umpqua Falls and the nearby hot springs. Both were short but steep-ish hikes to fantastic views. The falls are a sort of triple set, with the river falling into a pool about halfway down the falls before pouring out of that spot to the valley below. A wooden lookout makes a perfect place to view it, and there is a steep scrabble to the bottom of the canyon if you’re interested.

But we were off to soak in the hot springs, which we timed pretty well. The morning crowd was done and the full parking lot had one corner space left for us to shove ol’ Dusty into. The hike was over a steel pedestrian bridge and up and over the ridge… barely a mile. The springs had several people but there were at least six natural pools, plus another down on the ravine floor with the river. 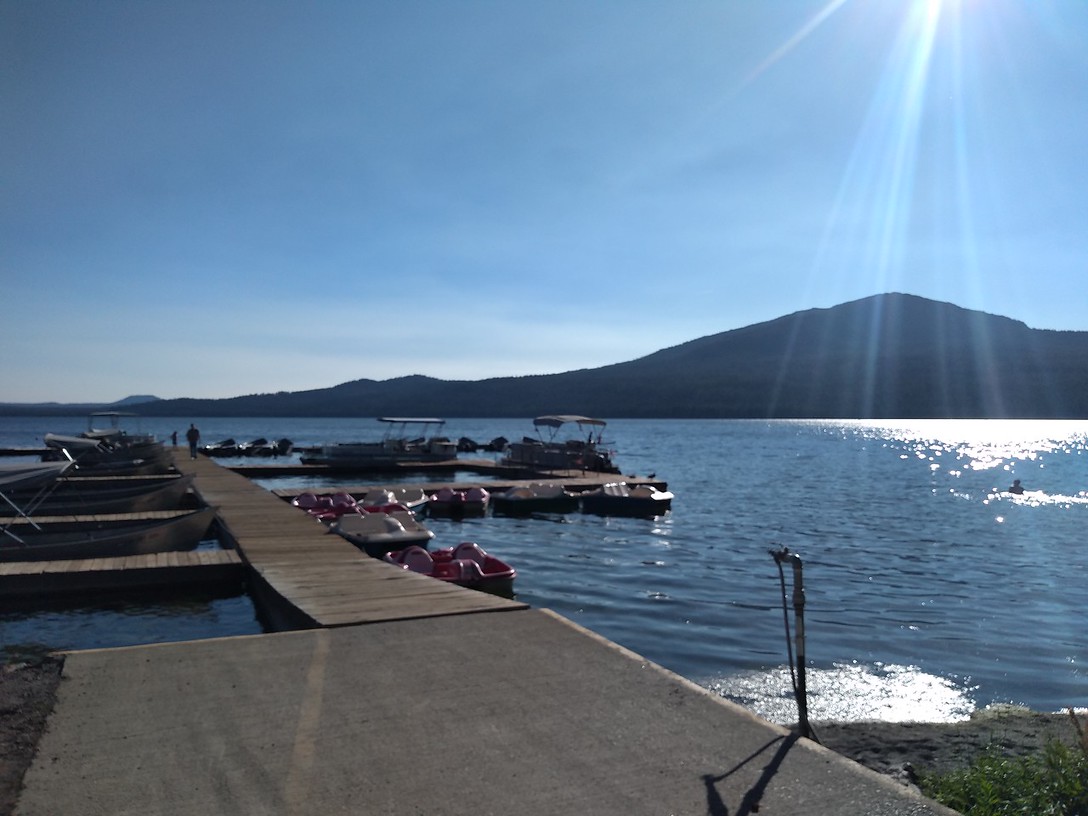 I soaked for awhile to loosen joints stiffened by sleeping on the ground, and Kate did her usual mermaid routine. She is a sucker for hot springs. I think she was some kind of fairy that lived at a hot springs in a previous life. Finally content, we went back to camp and made the ride to Coos Bay in the morning.

I’ve only been here about 24hrs, but Coos Bay is my kind of place. I already mentioned the vibe and the weather, so this isn’t too much more to say. I’d add that I could picture myself here, sufficiently off the coastline so as to avoid the thick fog that can take half the day to burn off.  But if you find the right hillside or valley that blocks the fog and lets in light through the many trees, you’ll for sure have a spot you can call home.

For fun we looked at a few properties, with $220,000 being enough to buy a small but totally remodeled house on a lot with a back yard, space for some fruit trees, and a detached 2-car garage to keep me happy. For $350,000 we found two houses next to each other, built in the 1890’s. Although in need of a lot of work, one was a 5-bed, 3-bath, 3-kitchen 2-story that was obviously an illegal multiplex at one point. It would make a fantastic AirBnB or Bed & Breakfast though, since the house next to it is a 2-bed, 1-bath with a massive bonus room built out of the attic. It’s fun to think.

In the morning we’ll be packed up again and running north. This will give us our last views of the Pacific ocean before heading inland toward Bend. After exploring that area it will be goodbye west coast, cutting across Idaho and wandering down to Yellowstone. The forecast is already showing nights below freezing and light snow at higher elevations. Kate has her winter gear already in the mail.

I’ll soldier on a bit longer since I can wear my rain gear while on the bike (it blocks a lot of wind), and if we camp in the lower elevations, the nights shouldn’t be too bad. Hopefully I won’t regret that statement. With no friends between Yellowstone and Colorado expect my good friends Dave and Sue in Moab, UT, I don’t have a lot of options as to where I’ll get my winter gear sent.

I definitely don’t want to visit Colorado without it, so we may just run the northern line through South Dakota, where I have a friend in the Black Hills I could send my gear ahead. We’ll have an obvious decision after experiencing the cold of Yellowstone and looking at both a road map and a weather map.

2 thoughts on “More on Oregon”